The charismatic town of Vianden is regarded for its unique medieval charm across Luxembourg; within the cobbled stone roads, bold fortifications, and soft-hued residences of ancient rulers. Several UNESCO Heritage Sites and museums conceal the borough’s wealth of history; though, the man-made gravitations are not the only source of fascination here.

Kilometers of lush green forests sheathed in the heart of Ardennes entice thousands of visitors each year; where cycling and hiking trails pave the way to the wild territory. To learn more about the charismatic town of the grand duchy, here is a quick overview of the top 15 destinations in Vianden.

On the cragged hills of Rhine, the castle of Vianden is one of the largest and most ancient strongholds of the country; hence a major touristic attraction. The Romanesque and Gothic architecture of the Château denotes its time of construction and origin. The very foundation was established on the remains of a Roman fortlet and later conquered, rebuilt, and destroyed during the reign of the Frankish Empire.

The current facade of the edifice remains since the 10th century onwards; creating a delightful blend of gothic decorations and renovation throughout five consecutive centuries. Because of the multiple lordships and ruling dynasties over Vianden’s seat of power, the interior illustrates the varied art styles and preferences of the sovereigns.

It comprises an elegant dining hall in renaissance style-contrasting with the rococo courtyard, noble chambers, and the renowned chapel on the second floor; with it pastel-colored fresco decorations, it is marked as the most striking section. Soaring on the prominent rock at the proximity of the fortress, a bell tower, known as Hockelstur, was added to the castle’s defensive barricades in the 17th century; which initially served a military Mirador.

Regarded as one of the most refined examples of art in Vianden, Trinitarian Church was built as a contribution to the order of the Most Holy Trinity in the 13th century. The exterior portrays the gothic origin of the architecture; although representations such as the colossal structure of the choir-stall with baroque design, the rococo altar, and Frankish frescoes justify the mingling of style through the reign of several counts.

Yet, much of the initial design remains untouched, retaining its original elements; the gothic cloisters, original fresco depictions of the Holy Trinity, and several statues including the tomb of Effigy- a masterwork of Jean de Liège, the Flemish sculptor.

It is only possible to discover a culture by peeking into the journey of its population from its beginnings; in effect, a transparent vision of the society’s evolution. At Musée de la Ville, visitors can immerse themselves in the history of Vianden. The museum is mostly themed around the dispositions that illustrate the 18th and 19th-century urban life of the village; although a small section is dedicated to the artifacts from the city’s first inhabitants in the middle ages.

Next to the village’s history museum, an ancient Bakery Museum reveals the demanding process of bread making back in the day and the handcrafted art of pastry. Lastly, a part of la Ville is allotted to Edmond de la Fontaine, the Luxembourgish literary artist, widely known by his penname, Dicks. It is mentionable, the museum’s building itself as a heritage site, once resided by the celebrated poet.

As a contribution of the state to the town’s art community, Art Gallery of Veiner was established in 2017. The gallery offers workshops to the emerging and experienced artists as a free space to create and express.

While held in a humble structure, the interior embraces a wealth of temporary and permanent exhibitions both from national and international artists take place here at Impasse Léon Roger.

Cross of Justice was established to epitomize Europe’s oldest charters in Vianden, in the 14th century. It was founded paces from the church of Trinitarian, under the command of Philip II; the Count of Vianden, whose inheritors ruled over the city for over three centuries as Nassau-Vianden dynasty. At the side of the cross, praises the recollection of la Fontaine, engraving a few lines of his poetry on a stone table.

The square surrounding the Cross of Justice marks the city’s hub, flanked by significant heritage sites, chic restaurants, weekly markets, and municipal parks. The astounding viewpoints of the restaurants’ terraces allow the visitors to admire the vista of Vianden’s ancient vestiges over an authentic meal and a delightful ambient.

Victor Hugo, enlisted among France’s most prominent writers, found serenity and inspiration in Vianden in the 19th century. He lived in Maison de Victor Hugo at the end of the 19th century, compiling some of his most touching masterworks in this charming township.

The hand-written pieces of the poet, his table, books, and personal accessory, all are safeguarded within his house museum. Exemplary public-spirited articles of Hugo reflect the envision of Europe’s unfortunate and immediate future, long before the breakout of the world wars.

Original furniture expositions illustrate the initial setting of Hugo’s living quarters; although some detailed items have been eradicated, the museum replaces with the missing elements with holographic projections. For literacy admirers, the house of Victor Hugo is a popular destination with a promising depiction of villa’s past and the life of Hugo.

The historical quarters of the city sprawl around Grand Rue; connecting the medieval residence of Vianden’s bourgeois, to the apartments of noble families and ultimately the bridge that stretches to the magnificent gates of Château. With a well-preserved facade, the old town is unique in its kind across the grand duchy, beaming with several cafes, restaurants, and hotels that are embedded within these ancient structures; such as edifices of Auberge De L’Our hotel, town hall and the old town’s pharmacy, that once served as noble-blood born residences.

Enlisted among the most picturesque destinations in the country, this district with its castle, glistening torrent of Our and the mountain backdrop along with the ancient dwellings, has earned the name of little Switzerland for Vianden.

A comprehensive perception of the canton’s beauty, at the feet of the Ardennes, becomes achievable by the virtue of the town’s fabled chair lift. Rising from 220 to 440 meters from the sea level, Sessellift is the loftiest of its kind in the country, escalating over Our river and Mullerthal jungles.

Besides the panoramic view, crisp air, and the souvenir photos were taken on the chair, the top station marks the starting point of a delightful hike to the castle and town’s old quarters.

Noted among the largest hydroelectric pump-storage plants in Europe, this station mark one of main the natural and educational gravitations of Vianden. The building itself displays pictures and models that help to understand the process of hydraulic energy and electricity storage; with guided tours and assistance upon request. The futuristic structure sits at the side of a treasure trove of nature; comprising hikable grottos, underground tunnels, and picturesque trails with panoramic views of the landscape.

Small pathways from the station climb to the holy mountain of the township, Mont St. Nicolas. This hike ranks as the forth popular trail in the Ardennes region, facilitating cycling and hiking both in moderate and difficult levels. The most rewarding sight of the mountain is seen from the top, overlooking the large hydro-plant and the picturesque vista of the town.

Trekking, either on a bike or on foot, is Luxembourg’s customary sport. To enhance the flavor of the simple pleasure of wandering undomesticated wildlife, Vianden offers ranges of recreational activities, from extreme sport clubs to fishing. Tree Climbing Adventure Club turns challenges into a fun and climbing massive trees to a risk-free adventure. Numerous workshops, rope bridges, slag lines, and facilities for the young children are among the features of this park, at the heart of Our forests.

Fishing for sports is a fun activity that binds the nature and a Zen hobby together; visitors of Vianden can acquire fishing licenses to fish at the artificial lake and Our River up to the German confine at Wallendorf. Boat rides, cozy side restaurants and the outstanding trekking paths at vicinity, have turned this destination to a popular spot for families and children.

Embracing valley of Our, the river, and a vast assemblage of waterfalls, woodland forests, and exceptional inhabitations, Our NaturPark is truly unique in all aspects. The park is sprinkled with historic heritages sites that are accessible through hand-curated hiking paths and outstanding cycling trails. Overall Promenade footpath starts at Vianden, crossing Bevels and ending at Stolzembourg.

Other notable hikes in this nature reserve include Clervaux-Our that passages at the side of the river Our, until the borders of German territory- and the national footway of Our; a 58 kilometers long trail, concealing a rich heritage, multiple historic structures and delectable gastronomy- hinting to both German and French influences.

Streaming at the heart of Our NaturPark, the river of Klangbaach was the spring source of the copper industry in the canton; therefore, a great contribution to the grand duchy’s economy throughout the industrial boom. Amid the debris of green bedrocks, oxidized copper creates an exceptional outlook, themed by the verdant forests in the vicinity.

A guided tour walks the visitors amidst a wealth of nature, to the cupric streak of the terrain and the ancient galleries. Small gorges and narrow passageways ultimately lead to the tunnels, over fifty meters below the surface.

A small museum at the end of these tunnels, parade the tools, artifacts, personal belongings of the mineworkers together with geological attractions such as fossils, rock formations and extracted ores from the surrounding mines.

Sprinkled with medieval remarks and war memorials, the township is home to several interesting historic point as well-regarded and emblematic reminiscences. Atop the castle of Vianden, a semicircular yard marks the viewpoint where the honored memorial of veterans of the US army. Another war memorial lies at Place de la Resistance, engraved on a stone panel in front of Église Trinitaire.

The 17th-century Wayside Cross, at the proximity of the national footpath and the bronze bust of Victor Hugo, at the city’s center, seen from the Pub Victor Hugo. Unlike most of the Luxembourgish inhabitants, this town suffered the adverse effects of World War II in a slighter manner. Though it was not exempt from the war’s ill faith, countless monuments, ancient vestiges, and artifacts across dating from the 10th century have been conserved.

Intra Muros Extra Muros, or the hike around the city’s ancient barricades, is a short loop around the city, covering most of the heritage sites; from walking on the ancient defensive barricade at the south of Vianden, watching over on the balcony of medieval counts, to the holy churches, thumbprints literary significant figures, and war memorials.

Several panels convey the details of the adjoining historic edifice, which serves the purpose of the self-walking tour.

Vianden is known for its fine taste of entertainment when it comes to tourism. Embraced by the verdant woodlands at the side of Our River, the Minigolf course comprises 18 holes with different sets of games for one or more players. As a highly recommended destination for families, the course houses a bistro, a serene ambient, and facilities to cater to the needs of the youngest participants.

A brief distance from the golf course, a few campsites are located that provide facilitated camping, at the boundary of Our forest; Camping de l’Our and Camping du Moulin are among these bivouacs. Whether with a Campervan, on a biking tour, or a long hike, camping at Vianden’s campsites stipulate a hassle-free and relaxing experience.

Another annual event in Vianden is the book festival in the month of September. Authors, book lovers, intellectualists, and artists gather in the medieval and chivalrous atmosphere of the castle. The festival’s notions are to serve as an extensive round-up, for raising the voice of writers and identifying of the new talents by publishers.

In conclusion, the town of Vianden is a multi-facade cultural town, with a glimmering history and breathtaking nature, that bids a delight for almost anyone. 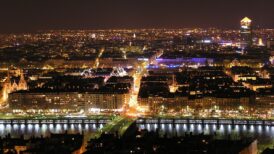 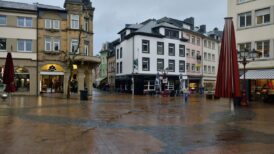 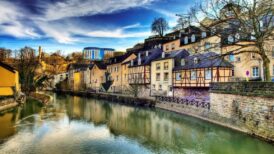 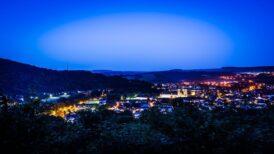 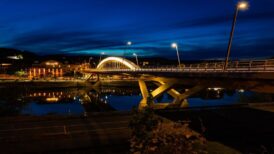