Australia embraces a unique cultural heritage, enduring from the depths of history and for tens of thousands of years. The relics of these cultures remain among the indigenous tribes across the country until today. Ceremonial rituals, pictographs and ancient art, antiquated pilgrimages, and all the stories passed down father to son and generation to generation, are at the core of Australian aboriginal heritage.

Today, these fascinating cultures are combined with exquisite modern cuisines, fine accommodation, and world-class amenities to grant a look into the lives and culture of the Aussie aboriginal communities. We have gathered a list of the top 15 destinations with an indigenous value in Australia.

Titled as one of the world’s natural wonders, a World Heritage Listed Site, and a coral phenomenon, the Great Barrier Reef has much to offer.

The turquoise shores flanked by white stretches of sand, the underwater world with bewildering marine life, the soaring coral mountains, tropical hinterlands, one of the kind coral cays, and quaint settlements in the vicinity are the most notable attractions. Likewise, the Great Barrier Reef has been home to Aboriginal and Torres Strait Islander natives who still uphold their nature-fused traditions and culture.

has been home to Aboriginal and Torres Strait Islander natives who still uphold their nature-fused traditions and culture.

Uiure, as the locals called the barrier, is marked with heritage sites, ancient aboriginal art and communities. Visitors of these aboriginal territories are rewarded with guided tours to the sacred sites, bonfire stories, and even a taste of forest forged delicacies.

Darwin is a quaint town known for its military heritage in the postcolonial era, and a quintessentially Aussie wildlife. Each August, people from around the world round-up at the Garma festival to join the aboriginal celebration of the original landowners of the ancient and sacred planes of Gulkula- a land cherished for over 20,000 years.

The festival lasts four days; Red Flag dancers from Numbulwar, Yolŋu tribals from the north-east Arnhem Land, other guest tribes from across the country, present a series of performances and traditional ceremonies. The ancient rituals are then merged with modern elements, displaying international music artists and non-native participants.

Once a sacred ceremony, the festival marks a bridge between the natives and non-native Australians today, in order to unite and exchange cultural comprehension between them.

Fascinated by pictographs and rock paintings? Then, Grampians is a must-visit location. Embracing over 90 percent of Victorian indigenous art, the bush walk trails walk the visitors through the pristine wilderness of the park.

In its vicinity, the Brambuk Cultural Centre is located within its namesake national park, offering guided tours through the aboriginal wonders of the region, along with guided safaris, rugged nature hikes that rise up to breathtaking viewpoints and extraordinary flora.

Known for its scenic monolith, red-hued desert, and picturesque sunsets, the plains of the Australia Central Desert are presumed and revered as a spiritual ground.

Perhaps it is the mystifying essence of the land itself, the natural silence of the desert that manifests as a spiritual calling, or it is the myths of creation and allegorical mysteries that were born of metaphysical pursuits of men and who dwelled on these terrains. Either way, Uluru–Kata Tjuta carries an aura of mysticism, captured within annual festivals, rock paintings, and symbolic worship among the aboriginal communities until today.

The cultural ceremonies and over 40 sacred sites each highlighted with a distinct story and the land itself are considered the inseparable parts of the ancient identity of Anangu people- identified as one of Australia’s most fascinating indigenous communities.

The barren landscape of Mungo National Park and the magnificent patterns left behind by the sediments of the ancient Mungo Lake, has been a home to aboriginal tribes for over 40,000 years- estimated following the excavation of the well-preserved body of the Mungo Lady and the Mungo Man. you can visit these historic discoveries in the National Museum of Australia.

Stamped as a UNESCO Heritage Site, the lake area was once used as a sacred cremation ground. Today, the park is a native residence to the communities of Paakantji and Ngiyampaa people, who also participate in aboriginal and nature discovery tours in the area.

Visiting the white sand dunes, barren landscapes with odd formations, and the singular wildlife are included in these tours.

The Flinders Ranges National Park is one of the cultural poles of the archaic Aussie heritage and inhabited by the Nukunu tribes for thousands of years.

Boasting a spectacular topography and unique wildlife, bushwalking and hiking over the slopes of the Flinders Ranges is a popular activity here. The Sacred Canyon, stationed a few kilometers from Wilpena Pound, holds international fame for its rock paintings and nearby trail etchings by the ancestral aboriginals who marked their way between the hunting routes and their settlements.

The indigenous legend has it that the Wilpena Pound mountains themselves were the remnants of two giant snakes that devoured numerous people during a ceremony and were not able to move further- hence forming the mountain ranges known as the Adnyamathanha in the native language.

The Kakadu National Park offers stunning landscapes. These terrains are covered with an untamed nature, known for their abundance of waterfalls connected by rock pools and emerald rivers, spectacular wildlife, and lush woodland. The park is registered as a world heritage site and a famous safari destination both for its land animals and magnificent birdlife.

Kakadu also protects several aboriginal communities and is rich in a culture that has flourished in relation to nature for eons. Ubirr Rock is a famous destination to gaze at the artistic thumbprints of the indigenous ancestors, along with the Burrungkuy area, and dozens of other historically significant locations.

The rock arts and relics in this region present a rare heritage, dating back to over 50,000 years ago, and are recorded as the most ancient landscape on earth that has been continuously inhabited by people.

On the splendid shores of the far north of Queensland, Cape York is famed for crystalline waterfronts, and uncontaminated wilderness stretching in all directions.

The peninsula is also the birthplace of the Laura Aboriginal Dance Festival, in the traditional terrains of the Yalanji aboriginal tribe. Cultural performances, tribal dance exhibitions, traditional ceremonies, and modern amenities. Once every two years, the festival is performed at the end of June and the start of July at the Ang-Gnarra festival grounds.

Purnululu national park sits on the eastern outbacks of the Kimberley region, acknowledged for its remarkable rock formations and beehive-shaped domes from an aerial perspective. The entire Bungle Bungle Range is marked as a national wonder and a world heritage site for its untamed landscape and rich heritage.

For over 20,000 years, these panoramic landscapes have been home to Kija Aboriginal tribes, who were pushed even further to the heart of nature after post-colonial brutalities that were imposed on the native tribes of Australia. Today, after half a century of peace, the natives are honored as the traditional landowners.

They also have a rich knowledge of their terrain and deep respect for nature, which makes them perfect nominees as skilled rangers, outback guides, and sharing magical stories with inquisitive visitors.

The Great Sandy national park is located on the world’s largest sand island- the Fraser Island in Queensland.

The wonders of the magnificent landscape do not end there; the park houses the famous Cooloola coast with its long stretch of sand dunes and unique rainforests, dry coastal plains, spectacular marine life, and picturesque shores, and a remarkable aboriginal cultural heritage.

The island has been home to Butchulla people for thousands of years, who are now the contemporary protectors of the park’s nature, forest rangers, and guides to take the visitors through their ancestral lands.

The Babinda creek sweeps through the granite country of the Cairns region, noted for its dramatic natural pools, emerald streams, and flush landscape. The name Devil’s Pools is a relic of aboriginal heritage. A native legend recounts that once a bride drowned herself in the pool after she was denied the marriage to her true love. Ever since her ghastly death has cast a curse upon that specific pool by tempting men to swimming and then drowning.

For taking a dip, there are a handful of designated pools nearby that are curse-free and safe to swim in.

Yidinji people are the traditional landowner here, who also offer walking tours to the region’s nature walks, wildlife spotting, and recounting all the legendary stories of the region, including that of the Devil’s Pool.

The entire northeast terrains of the Northern Territory are pronounced for their rich aboriginal culture. The archaeological evidence proved the existence of natives in these areas for over 60,000 years.

The flourishing Gunbalanya community is singled out for their hospitality, colorful ceremonies, celebrations with dance and music of the native instrument untamed, and countless stories about creation in the towering hills and the wild nature in the vicinity.

Recognized for their black facade from afar, the boulders and the fertile slopes of the Black Mountain National Park have been home to the native tribes for generations.

The land is regarded as a sacred site and ceremonial ground to Kuku Nyungkal people, or as the natives believe, a Warfield of both spirits and warrior clans. Numerous stories and mythological encounters are born out of the mystic substance of these mountains, which continue to bewilder the visitors of the mountains.

Just paces from the turquoise shores of Stockton Beach, the Worimi Conservation Lands presents the most magnificent and largest sand dunes of the southern hemisphere.

The aboriginal heritage around these sandy landscapes goes back to  12,000-year-old, cherishing these pristine dunes and shores as a sacred site.

Identified as one of the earth’s oldest living cultures, the Aboriginal-owned park are a treasure trove of bewildering nature, Aboriginal folklore, and unique customs and traditions. Four-wheel dune driving, beach activities, and cultural tours are the popular touristic endeavors here.

The banks of River Murray rise up to the towering cliffs of the Ngaut Ngaut, imposing with their yellow facade and countless rock art locations.

These lofty limestone rocks are covered with scarce heat shrubbery and connected with curated trails that lead to exceptional perspectives, both over the river and the Aboriginal art sites.

Visitors can take self-guided tours to the regions and visit the Nganguraku and Ngaiwang communities. However, to visit all that the park has to offer, an indigenous guide is very much recommended.

The far-flung deserts and sparse Malkumba-Coongie Lakes are the traditional lands to Yandruwandha and Yawarrawarrka people, with much-preserved culture to marvel at. The region is also a famous birding ground and possesses rare wildlife around its curious mix of topography, covering from wetlands to heath shrubberies.

Discover more about Aussie History & Culture at a Glance, with our List of Top 20 Museums in Australia 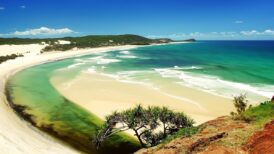 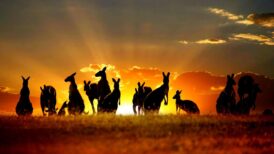 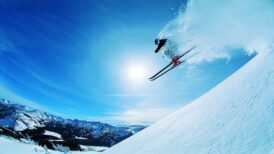 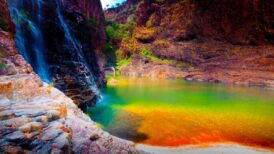 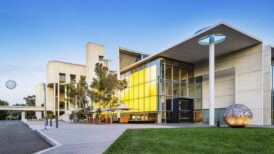 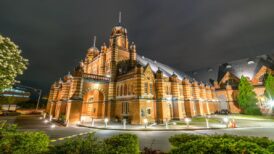 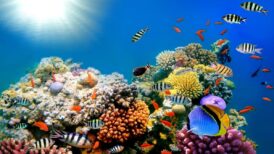 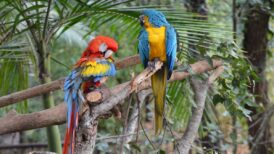 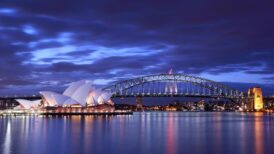