Wondrous elements and Canadian territory seem to be indivisible; while the terrain boasts many rare and unique landforms and biotic life, some of the manmade attractions here are incredibly peculiar as well. From ghost towns to ghostly open-air art galleries, ingenious terrains to extraterrestrial-oriented locales- outlandish attractions are countless across the country.

To discover these awe-inspiring and unforgettable national historic sites in Canada, read our list of 15 most enchanting destinations.

Canada’s largest national historic park protects the rich heritage around the shores of the Great Bear Lake, and the foothills of Grizzly Bear Mountain. The Sahtu nation for millennia has practiced spiritualism and healing on these lands, known for the holy essence among the aboriginal culture.

Each summer, the sacred site is the place that authentic shamanism blends with cultural tourism, epitomized around shamanic practices, healings, and ritualistic celebrations- together with bonfire storytelling that is a mix of the region’s oral history and folklore myths. Out-cast visitors can camp in the Teepee poles, and join the healing practices or simply savor the cultural goodness of the ancient ceremonies and legends.

The typical North American lawn rodents are even more endearing when dressed as people to portray the Torringtonian people and lifestyle. Here at Gopher Hole Museum, exhibitions of a series of carefully curated and dressed Gophers present a variety of anthropoid scenes, hinting to the township’s everyday life.

Gophers riding chariots, marriage ceremonies and the vow reading pastor, and even aboriginal gophers in ethnic scenes- Doramas here cover a wide range of scenarios. Since 1996 and the initial establishment of the museum, thousands of visitors are lured to this extraordinary exhibition that shines a light on the town’s history since the first nation people and until the modern Albertans.

The industrial age gave rise to many drastic changes in Canada, towns were built and abandoned, mines drilled the regions with queries and locomotive trails, roads extended across the country and the country’s culture blended into a modern elixir.

Bankhead town was a mining town near Banff Hot Springs, with a short-lived, though troublesome, history. As a well-developed community, their luck ran out when the coal mines proved inferior in quality and worthless, together with extensive railways, mining establishments, and the community itself.

The result was a lack of payments and many labor strikes. Eventually, it was announced within the protected boundaries of Banff National Park; which completely eradicated mining, leading to mass immigration and finally abandonment of this heritage town.

Besides the mining vestiges and ghosted township, scenic shores of Lake Minnewanka with campsites and scuba diving facilities, and the reserve’s many hot springs are at a short drive from Bankhead- linked by hiking trails for more adventurous visitors.

One of the most quirky spots in Canada lies around St. Lawrence Bay, comprising an open art gallery amid the dynamic marine landscape and bordering forests of la Mer Sainte-Flavie. The most spectacular aspects of the galley are the crudely sculpted statues built from raw stone and crooked wood, footed around the extreme tidal waves.

The artist intended to bring the dead to life in the arrangement of the figurines. When the tides are high, the few first statues are thoroughly submerged, to half-drowned and unsunken figures forming an illusion of the migration of figurines from the depth of the river to lush coastal jungles.

Hand-carved statues include a variety of characters; two-headed figures, dazed personas, working lumberjacks, children, and even deceased figures, lying face-up on the shore. The gallery is described as both sensualist and grotesque, certainly marking a world-unique cultural attraction.

Heritage cities are many, but a town dedicated to fiction, and perhaps the future, is rather rare; Vulcan is the official Star Trek Capital Of Canada. It houses themed elements hinting at the extraterrestrial planet known as Vulcan, according to the Star Trek media franchise.

Giant models of fictional space crafts, virtual reality games, Star Trek collectible at memorabilia and Vulcan Historical Museum, murals, building structures and every direction hints to the otherworldly spirit of the township. While Spoke was a side character in the original star wars fiction, he is the lead star of Vulcan- named after his planetary home and celebrated at Spock Days Convention.

Seen as fun for the young and old alike, Vulcan Tinman Triathlon annual festival cherishes the memories of a generation of science fiction fandom.

While Vulcan focuses on the fictional aspects of space, space matters are taken more literally at St. Paul. Half a century ago, the earth’s very first UFO Landing pod was built here, to welcome the earth’s first extraterrestrial arrivals. Crop circles, UFO sighting videos, and pictures, and the historic pod information and studies are the key themes at UFO Landing Memorabilia Museum.

Designated as the Centennial Capital of Canada, St. Paul offers a futuristic tourist center- much resembling a spacecraft structure. The entire structure is famed worldwide for its mind-boggling exhibitions while presenting the symbol of universal peace on the first arrival of our alien visitors.

U.S. infantry Cark K. Lindley started a long-standing tradition, completely without intentions, when he posted his hometown signs while working for the Alaska Highway project-though he was appointed only to repair the local panel boards and road signs.

Ever since, visitors of heritage valley of Upper Liard and Watson Lake’s trails have continued the homesick soldier’s legend, compiling into over 8000 sigh posts from all around the world. Today, this signpost riddled forest enlists among the top Canadian Roadside Attractions, and surely an unusual one.

Both children of today and yesterday find their nostalgic idols here, sheltered at this fairy tale wonderland. Trails, pretty as a picture, swirl around the little hobbit dens, tree houses, and over 350 figurines, all of the fictional backgrounds.

Wildland Interpretive Nature Walk mingles the ancient cedar forest with quirky man-made figures and one of North America’s tallest treehouses. While the forest remains an all-time favorite for children and family vacations, photographers receive a fair share of the landscape’s peculiar outlook.

A house made of plastic may not imply security and fine architecture, but Wellington’s plastic bottle village makes you think twice. Edouard Arsenault started the project, putting thousands of bottles together with cement binding and architectural excellence; a native genius, who crafted the discarded plastic bottles into sustainable residences.

Today, an entire village has dedicated to the forms of renewable energy and construction materials and enveloping curated lawns.

Canadians are known to treasure all their cultural elements from the country’s very beginning. Only a few kilometers from the heritage city of Dawson, Paddlewheel Graveyard lies amid the boreal forest, housing the region’s heritage of transport.

While water represented the primary mode of transport in Yukon, roads and new technology outdated these ancient boats. The forsaken vessels are exhibited at the heritage graveyard- including a handful of ships that testify to grand breaking voyages, in consequence of important historic events.

After Canada’s aboriginal nation, Vikings are the first people who walked on the terrains of North America a thousand years ago. They traveled by sea from Europe, harboring at the shores of Canada’s easternmost province, Newfoundland.

Appointed as a world heritage site, L’Anse aux Meadows is the continent’s only and well-preserved Norse village, foregoing to the 11th century. The turf’s timber outlining, slanting roofs, and the house’s wooden structure within, blacksmith artifacts and ritualistic Norse elements- all bear a close resemblance to typical Icelandic Norse settlements.

Located at the meadow terrains of Gros Morne National Park, the Viking Hike runs over 70 kilometers, joining the reserve’s most enthralling attractions to the heritage settlements of Canada’s first Europeans.

Saint-Pierre And Miquelon is French in essence its flag, culture and language, and best of all its food- located just at a sailing jaunt from Newfoundland. Mentioned as the last remaining piece of the new France treaty in North America, Saint-Pierre and Miquelon have preserved the medieval attribute- much resembling southern France seaside communities.

It spans over two islands connected by a sandbar shoal and fine seaside resorts. Rum is the island’s master craft, served at the side of delectable French seafood and pastry; though, as the French culinary tradition has it, premium wine is plentiful too.

Once a teacher, Peter Camani turned his passion for sculpting and architecture into a single project for the year to come. The result was Midlothian Castle, built from wood and stone- better known as the Screaming Heads.

Boasting over 300 acres, the entire place is ladened with artful sculptures, even in the castle’s fundamental framework. Though the element that gives the castle its name and its eerie Halloween vibe is the seemingly crying figurines in large proportions.

Heads and hands beaming behind random hedge bushes, sorrow or fear expressed in almost all sculptures, a dungeon in the basement and the list of quirky peculiarities go on. Halloween themed events are the October specials here, while it remains a fun playground and an open-air art gallery the rest of the year.

Folklore and old tales are the main argument at Glitchy’s Oddities Museum, exhibiting manifests of Saskatchewan’s mythologic heritage. Sophie the doll, possessed by the evil spirits, evidence of Big Foot’s existence, native mermaids and legendary creatures, diminished heads, and all other uncanny items.

The museum offers its own shop, self claimed as “the worst store ever” in the same Glitchy humor of the displays- offering novelty items, and peculiar souvenirs. Visiting the museum outlines a brief overview of centuries of folklore legends.

Gwaii Haanas is a trove of aboriginal heritage, rare nature, and spectacular recreation, housing indigenous art at the canopy of the island’s rainforests. The moss-ridden trails, a rich marine, and terrestrial wildlife, rich salmon pools, and virgin cedar forests have been a country of Haida Nation for centuries, leaving behind structural vestiges at ghost villages, and the totem poles of SGang Gwaay.

The archipelago is a tranquil refuge for its unique wildlife. Whether to watch the breaching whales from the wave-washed shores or the aboriginal kayaking routes, acquaint with the culture of Haida Nation, hiking through one of the world’s intact rainforests, or simply indulge in recreational leisure- Gwaii is enchanting in all directions.

Top 15 Most Visited Castles in Canada

15 Most Beautiful Valleys in Canada 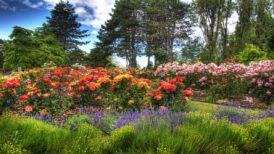 15 Most Scenic Botanical Gardens in Canada