Among the world’s most beautiful landscapes, waterfalls are a natural treasure. The misty surrounding, moss-ridden verges and fierce downward stream are often accompanied by rainbows and birds humming around their forever fertile nests.

Here, we take you along the coast to coast, to visit the most iconic and mesmerizing waterfalls in the US- to at least visit once in a lifetime.

Havasu Fall is a masterwork of contrasting colors, with the red bedrocks, green shrubberies and one of the world’s bluest waterfalls. Havasu marks the most attractive of the five Havasupai Falls.

Sheltered within the namesake Indian Reserve, these waterfalls count as a part of the Grand Canyon’s world-famous wonders, and accessible only by trekking permit for a night’s stay.

Wildlife, a Dark Sky reserve for stargazing and shimmering gold sunrises and sunsets over the red terrain, sketches the essence of Havasu Falls’ landscape.

The colossal Niagra Gorge lines the natural boundaries between the United States and Canada, secured with the world’s fastest moving cascades. A handful of renowned vantages points are designated around the several trails, granting astonishing vistas- whether from New York observation towers or Bridal Veil Falls loop trail viewpoints.

Shopping malls, rotatory restaurants looking over the falls, fancy hotels, and signature restaurants. In addition to man-made conveniences, there is no shortage of fun activities here; such as hiking up to Niagara Gorge Hiking Trail, Devil’s Hole State Park, and the famous Canadian escarpment.

Enlisted as one of the most beautiful waterfalls worldwide, Yosemite Falls ranks as North America’s tallest cascades- with a sheer drop of 739 meters from its craggy heights.

Complemented with granite monoliths and a verdant river valley, it consists of three falls fed by the glaciers of Sierra Nevada, which overlap to create a single massive waterfall.

Bearing in mind the region’s summer drought, the best time to hike to Yosemite Waterfalls is during the spring; when most of the winter snow has thawed, and the footpaths to the sheer waterfalls are bordered with spans of wildflower beds.

Nicknamed the Chocolate Falls, Arizona’s stream of mud and clay cascades is a spectacular sight. Located at the heart of the Painted Desert, these magnificent falls are a part of the indigenous desert of the Navajo Nation.

For recreational highlights, the colorful wonderland of Painted Desert is veined by several hiking trails to the falls, the scenic sandstone mazes of Antelope Canyon, the towering summits of Monument Valley, in addition to the river’s canoeing routes.

The best time to visit these falls in their full galore is in spring and during the monsoon when the streams are fed by melting snow and seasonal rains.

Shuddering over the rugged foothills of the Appalachian Mountains and the Cumberland Plateau, Fall Creek Falls is a hidden gem. It flows over the tall and eroded granite walls, into a turquoise gorge surrounded by lush greenery.

One of the earth’s most exquisite landforms is found just outside Chattanooga’s suburbs. While crowned as the deepest and tallest waterfall caves in the US, the falls earn their name from the LED light show. It creates a dramatic effect on the striking formations of stalactites and stalagmites, and elongated flowstones.

The falls swing to the heart of a picturesque cavern, that is accessible by a 26 story elevator to the dark depths of Cumberland Plateau. Atop, the elevator takes the visitors to the heights of the observation deck, Mountain Tower, overlooking the verdant plains around the Tennessee River Gorge.

Known for its grandeur, rugged beauty and salmon riddled water, Shoshone Falls is nicknamed as Niagara of the West- although it beats its eastern rival in height and landscape wilderness.

The prosperous shores of the Shoshone Gorge were once the fishing and fur trading grounds of the Indians tribes. The historic significance of the falls stretches further through the history, documented as the meeting point with the early European colonists in the wild west, and later the industrial boom after the Snake River’s gold rush.

Today, recreationalists are the main visitors of these rugged landscapes. Hand curated trails, canoeing routes and fishing, picnic areas, observation decks granting once-in-a-lifetime vistas, and the falls and their fierce beauty- all located only 5 kilometers at the comfort of the charming township of Twin Falls.

The Weeping Wall is a poetic name and expression for the great many waterfalls flowing down the leafy cliff sides of Mount Waialeale. Located at the coastal center of Kauai Island, innumerable cascades spill over the mountain ridge and sweep down to a lush valley.

The hike to these falls calls for skill and passion for the hardship of discovering densely tropical landscapes. Notorious for its record-breaking annual rainfalls, the valley is both vast and covered in a thick canopy of vegetation.

Countless lagoons, wetlands, streams, and waterfalls lie around the trail, often accompanied by hours of rainfall most of the year. All the hardship aside, the vista of the iconic Weeping Wall is worth it all.

Not far from Yosemite Falls, Bridalveil Falls is cherished by landscape photographers, hikers and those appreciating the earth’s rare beauty. Lining through Yosemite Valley, the park’s connective trail links several epic waterfalls, and viewpoints for the best vistas of the falls’ misty veil.

However, the most photographed vantage point over the Bridalveil is at the Tunnel View during the spring- when the snowmelt adds to the falls’ intense splendor.

The glacier carved gorge of Palouse Falls dates back to the Ice Age, shaped by the ever-flowing Palouse River. Walled with tall bluffs, the river flows down further to join the beautiful Snake River- a world famous destination for kayaking and whitewater rafting.

In addition to the scenic falls, Palouse Falls State Park is a home to several indigenous historic sites, the first wagon road over the Rocky Ranges, and the epic vistas of the narrow valley along the trail. The region’s recreational facilities include; serviced campgrounds, picnic areas and designated fishing creeks, all located at a short hike from the small township of Starbucks.

Yosemite Valley is famed for its exceptional landforms and a home to signature landscapes captured by eminent photographers. Among the iconic destinations, the Glowing Horsetail Falls, or Firefalls as some call it, earns its name from a natural phenomenon.

During a short window in the last two weeks of February, the sunset’s orange and crimson rays illuminate the cascades. The reflection bids a visual illusion resembling a glowing horsetail or a streak of trembling liquid gold.

Spilling onto the pristine white-sand stretch of McWay Beach, the waterfalls drops from the towering McWay Creek- a deep chasm in the sheer Big Sur coastal rocks. Joined with all the boundless beauty of The Pacific Ocean, the trail’s best viewpoint of the falls is connected by a staircase to the beach.

The trail itself has suffered natural demolishes and entering from the southern entrance and paved footpaths from the parking lot are recommended. This scenic beach and its cove are a summer favorite for swimming, surfing, and other aquatic recreations.

Recognized as the sphere’s tallest seaside waterfalls, Olo’upena Falls sweep down the lush and towering coastal cliffs of Moloka‘i- the serene and historic member of Hawaiian islands. Visitors can cherish the vista of America’s highest waterfall from the pacific ocean cruise boats- overlooking the colossal fall sweeping down from the clouds.

Alongside an authentic culture and robust nature- such as the world’s eight tallest cataracts at Pu’uka’oku Falls- the island is home to exceptional elements at Palau State Park, such as the fertility granting Phallic Rock.

Named as the Niagara Falls of the South, the Cumberland falls shares the block-shaped falls shape, misty beauty, and grandeur with its northern rival all except for the tourist bustle. Surrounded by pristine nature, various trails lead the way to the falls and the verdant Daniel Boone National Forest.

Since the first indigenous inhabitants, the mesmerized new migrants and modern tourists- Cumberland falls have long been a source of astonishment and recreation. For those who visit at the right time, the most poetic aspect of Kentucky’s tallest waterfalls is the full moon rainbows, otherwise known as the moonbow.

As a two-tier waterfall, the best vantage points over these falls are located at the observation deck for a birds-eye perspective and in between the vertical leap of the tiers; the picturesque Benson Footbridge is connected to the falls’ trail, and to 27 kilometers of groomed passages at the heart of this natural oasis.

Waterfalls down-pouring into a sea or an ocean are a rare sight. On the coastal bluffs of Point Reyes National Seashore, Alamere Falls spot one of California’s most attractive terrains and the bay’s most popular area for recreational. To reach the dune-backed seashores and the silver cascades, Palomarin Trailhead grants breathtaking sceneries, basic campsites, and groomed footpaths.

Besides the falls, the trail boasts moss-ridden coastal rocks, lush forests, and above all, several sweet-water lakes on the Douglas Fir-covered slopes. It features; charming settlements and nature around Pelican Lake, Bass Lake with rope swing trail parts and seasonal harbor seals, Wildcat Lake, and its scenic beach and campground- along with a handful of other hidden gems and lakes varying in sizes and beauty.

Also called as Mendenhall Glacier Falls, these falls drain the snow melts of Nugget Glacier. Trembling over the hillside slopes of Bullard Mountain, Nugget Falls overflow into the shoal of Mendenhall Lake. These cascades highlight one of the most spectacular areas of Auke Bay, sided by salmon filled-creeks, roaming elks, moose and grizzlies, and all the quintessential beauty of Alaskan landscape.

Noted as an anglers paradise, the region also marks an important fishing harbor in North America- crabs, salmon, Pacific and Arctic cod are the seafood speciality around the cascading Nugget Falls.

Detached by a spectacular terrain, Tahquamenon Falls is linked by an adventuresome hike and the cedar-forested hills of Lake Superior. Characterized with its shades of umber, the falls owe their color to the cedars’ tannin, which is slowly extracted into swamps and later into the river. Each season grants different bounties to Tahquamenon Falls State Park.

Wildlife sighting, verdant woodlands, and fine camping temperatures are the major attractions in summer, while winters offer finely snowed snowshoeing trails and skiing slopes. Although, the most beautiful time to visit the falls is during autumn when the earthy colors of the stream match with the shades of the fall foliage.

A simile to the oasis of The Greek Gods, Silver Falls is named among the most beautiful waterfalls worldwide. The gentle slopes of the Cascade Mountains are cloaked with lushly grown rainforests and myriads of streams and waterfalls- collectively found on the Trail of Ten Falls.

Kirkham hot springs are distinguished for their scalding rock ponds, hot spring waterfalls, and the uncontaminated wilderness of Boise National Forest. The steaming banks of the Payette River feature an all-year healing and relaxing ground.

However, while contrasting with cold, winter-time soaking in these under the sky pools during the snow season gain even more popularity. Apart from the hot springs, other attractions include; bird watching, hiking, and outdoorsy camp-outs.

In conclusion, here are two more of our favorite waterfalls in the united states- that just might fit your bucket list;

Virginia Falls glides down to one of the purest and most translucent glacial gorges. Located over the flourishing slopes of the Glacier National Park, the trails cover Virginia Falls and nearby St. Mary Falls, at proximity to numerous National Historic landmarks, including Going-To-The-Sun-Road, and natural attractions like the Continental Divide.

Another one of Hawaii Islands’ hidden treasures, Akaka Falls is a sinkhole pit amid the lush rainforests at northeastern Hilo Coast. Hiking trails loop around the tropical vegetation, a series of smaller falls, and the welcoming and intriguing Manta Ray Village. 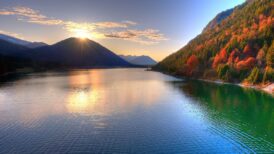 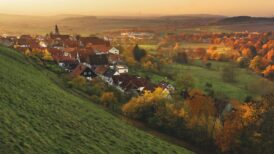 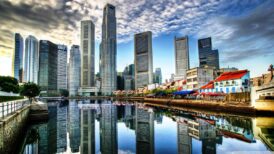 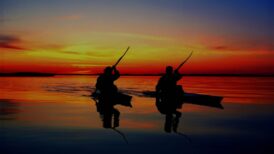 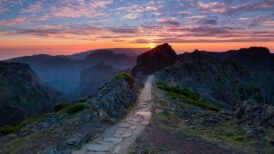 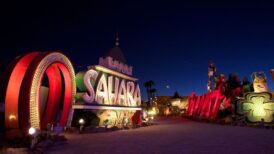 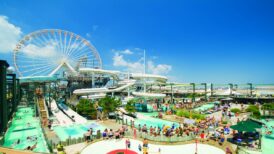 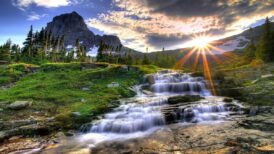 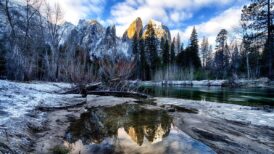